About Us > Healing Turtle Island

The Collegiate Church, established in New Amsterdam in 1628, held a healing ceremony with representatives of the Lenape Indians on Friday, November 27, 2009. The date marked the first observance of Native American Heritage Day, as signed into law by President Obama in June. “Turtle Island” is a common reference among Indian peoples for the land that European settlers called “the new world.”

As the 400th anniversary of Henry Hudson’s discovery of Manhattan draws to a close, the healing event offered a substantial peg for a story on Collegiate   Church, the oldest surviving institution of New Amsterdam, and the Native Americans who met the Dutch settlers here.

As the “company church” of the Dutch West Indies Company that made New Amsterdam a “company town,” Collegiate Church, speaking only for itself, acknowledged publicly the role it played in the cultural marginalization and physical dispersion of the Native Americans living here, slowly degrading them (in European eyes) from a people with their own culture and civilization to merely another resource.The event site was near where the first Collegiate Church was raised in Fort Amsterdam. Surrounding the site are reminders the most enduring contribution by the Dutch to American civic life, an economic system built on Calvinist enterprise and laissez-faire capitalism, exemplified by the Beaux-Arts Custom House itself, Steamship Row, the Standard Oil building and Wall Street. Native Americans were excluded from this feast, however, or were exploited by those who were admitted.

Just across State Street from the event site is a monument to possibly the greatest misunderstanding by the Dutch of Native Americans, Peter Minuit’s so-called “purchase” of Manhattan in 1626 for 60 guilders’ worth of dry goods. “Thus was laid the foundation of the City of New-York,” says the marker on the monument.

That is true, of course. But the Lenape did not have a concept of private ownership of land; likely, they believed that Minuit simply was thanking them for the aid they had given the Dutch settlers when they first started arriving here. However, the Dutch either did not know or did not care to know that fact and proceeded as though they had bought Manhattan outright. Four hundred years later, European arrival, settlement, and culture still dominate New York and America’s paradigm of history.

With no illusions about correcting past errors, Collegiate Church has determined to acknowledge its forebears’ short sightedness in the healing ceremony and move forward with new found care and respect for the Lenape and other Native Americans who respond to the church’s outreach. According to census figures, New York City has the largest number of self-identifying Native Americans living in an urban area, almost 90,000.

The ceremony included prayers from both parties, music, symbolic exchanges, a statement of healing, adopted by the 57 member Consistory of the Collegiate Church as an official resolution and a response by representatives of the Lenape people and their kin. The event concluded with a traditional fellowship meal and was open to the public. The story was told by the people whose story it is, representatives of Collegiate Church and the Lenape. 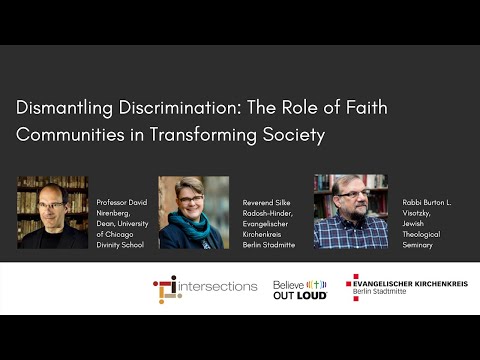 On Wednesday, May 12, Intersections International and Believe Out Loud, in partnership with the Evangelischer Kirchenkreis Berlin Stadmitte (KKBS), hosted an enlightening discussion on the role faith communities can play in breaking down the discriminatory beliefs and practices that hold us back as a global community. University of Chicago Divinity School Dean David Nirenberg was joined by Rabbi Burton Visotzky of the Jewish Theological Seminary and Rev. Silke Radosh-Hinder of KKBS. The program was moderated by Anna Dreves, Intersections’ Chief Ethics Officer and Justice, Advocacy and Civic Engagement Manager.

On Wednesday, May 12, Intersections International and Believe Out Loud, in partnership with the Evangelischer Kirchenkreis Berlin Stadmitte (KKBS),...